In a way, it all started with Sticky Buns. 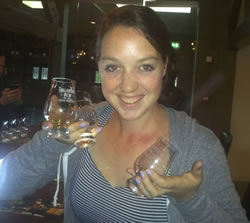 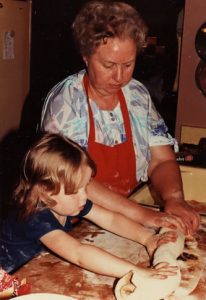 Christmas mornings, they filled the house with an irresistible aroma of freshly-baked bread, cinnamon
and brown sugar. As a very young child, I’d “helped” my mom or my grandmother to make them, rolling out the soft springy dough, sprinkling it with cinnamon-sugar, raisins, nuts and dollops of butter, and then helping roll it all up into a long fat log, sneaking a sugar-coated nut or a raisin to nibble on when I thought they weren’t looking. (It never occurred to my child-self that they’d probably done exactly the same thing when they’d been girls!) Then we cut the log into pinwheels of cinnamon-raisin goodness and carefully placed them, swirly-side up, in a baking pan that was already lined with yet more butter and sugar.

I remember the first time I was allowed to help with slicing the dough. My grandma’s hand held mine as I grasped the very sharp knife, guiding me gently to cut the dough straight and clean. And the big smile she gave me when I carefully placed the resulting roll into the pan!

But the true magic came the next morning, after they’d been pulled, hot and fragrant, from the oven; when they were turned upside-down onto a serving platter and the caramelized butter and sugar ran down their sides in the cascade of sticky sweetness that gives them their name. Steaming, they were pulled apart and placed on plates, finally ready to be devoured by children who gloried in the transfer of stickiness from bun to hands and face, greedily licking fingers, palms and plates, sharing sugar-smeared grins of pleasure in the buttery-sweet flavor on their tongues. 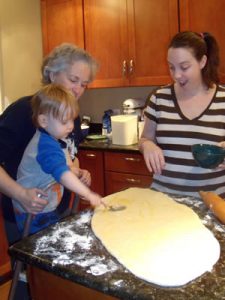 The Tradition Continues: making Sticky Buns with Mom and my nephew

Ah, Sticky Buns. They represent everything that makes me a baker today. Tradition, family, the joy of making something delicious and sharing it with people you love. Fresh, wonderful ingredients. Amazing scents, fabulous flavors, and that particular satisfaction that arises from creating food that will linger in your memory forever.

Years later, living on my own in New York City and working as a Production Stage Manager for Ensemble Studio Theatre, I started baking treats for patrons to buy on show nights: cupcakes, cookies, small cakes and more. People loved my goods, and I soon realized that I was much happier making cakes for theater-goers than I was making theater for them!

In 2011 I moved away from the Big Apple to Pittsburgh, PA (a city I quickly fell in love with). I began to get more involved with creating recipes that combine flavors in unexpected ways, and frequently incorporate some of my favorite beverages. Friends and coworkers devoured these creations much like a
four-year-old goes after a Sticky Bun, which of course only encouraged my madness!

As my passion for this work grew, it became clear that baking was becoming more than a hobby. So I enrolled in the local community college to study the art of Patisserie and Small Business Management, and founded Prohibition Pastries two years later.

I am happy to have found a home in a burgeoning culinary environment filled with local pride and a true sense of community, and am thrilled to add to that community by baking up smiles and good memories for all of you, just as my grandmother did for me.

And yes, Sticky Buns will be available and not just for the holidays!!